Posted on March 1, 2012 by lizcaplanblog

There is something that happens in theater, and almost nowhere else. It’s rare, and when it happens, it is magical; it is the alchemy of sitting in a theater seat and being completely transported into another realm. We were lucky enough to have this happen to us when we went to the New York Theater Workshop to see their production of ‘Once’, the new musical based on the truly lovely gem of a movie that came out in 2006 about street musicians in Ireland. We hadn’t been sure about it – could the larger scale of the stage capture the delicate emotional detail of the film? – but the show convinced us. Yes, the stage could capture all the heart of the movie, and even more.

That run downtown ended, alas. But luckily for us, and luckily for you, ‘Once’ is moving to Broadway. They started previews this week, with the same stellar cast they had downtown, and with our own Liz Caplan as the vocal supervisor. So we admit, we’re a little biased, but even if we weren’t, we’d say go, immediately. You will cry, you will love, you will remember how magical theater can be. And if that doesn’t convince you, just watch this TV spot:

Or check out this video of one of the songs in the show, performed by the talented (and hunkalicious) Steve Kazee:

Or, just gaze at their amazing and talented cast: 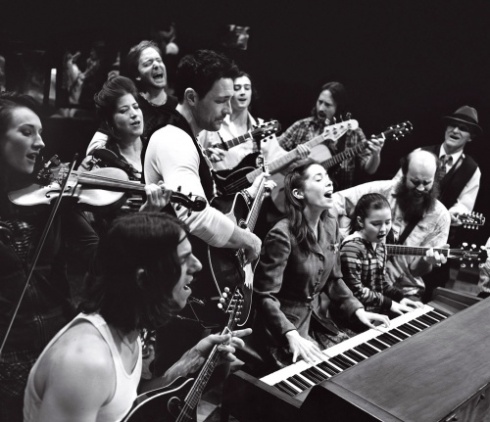 LIZ CAPLAN, has been teaching and coaching voice since 1978 in New York City and guest lectures throughout the United States and Europe. Her students are currently featured in principle roles on Broadway, National tours, Off Broadway, regionally, and as artists in the recording industry. Some have also been nominated for the prestigious Tony and Grammy awards and have been Emmy award winners. Besides working vocally with recording artists, Liz does consulting work for all the major record labels. Liz Caplan Vocal Studios is located in New York City, and is one of the premiere vocal studios in the country. Now staffed by Liz and a group of highly trained and talented Voice Teachers, it is able to bring Liz's mission of 'balancing the state of the artist' to many.
View all posts by lizcaplanblog →
This entry was posted in Uncategorized. Bookmark the permalink.